It is a standing restrictive type , in which a calibration guide is introduced and then severing the greater part of the stomach by means of a device called suture mechanical endoscopic , which cut and suture the remaining stomach using titanium staples . The body and fundus of the stomach is removed leaving a small gastric tube along the length of the lesser curvature of the stomach . The approximate total remaining capacity of the reservoir is from 1 to 3 ounces , with this early satiety is achieved .

At surgery gastric sleeve gastrectomy or removal of the fundus of the stomach and that is precisely where most of the hormone Ghrelin is produced body is done . This hormone also known as the hunger hormone has been widely studied , showing that its levels increase significantly with prolonged fasting and simultaneously produces increased anxiety . Scientists assert that decreasing production of ghrelin can control hunger and overall anxiety.

This surgery is used as a single procedure as an alternative to gastric bypass and their popularity goes along with comparable weight to reduce risk and lower trans and postoperative effectiveness. This procedure can also be used as a first stage switch to the procedure or the Bypass duodenal Biliopancreatic, super procedures used in obese patients. 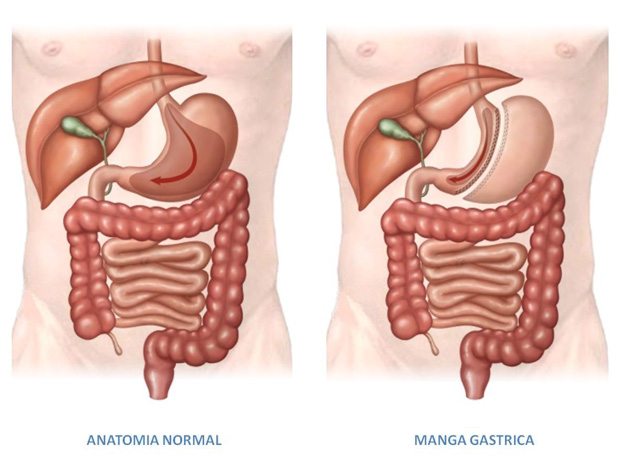 Queremos conocer tu caso, no dudes en consultarnos / We want to hear your case, talk to us.